Say NO to Roberts Bank Terminal 2
Watch Video To See Why!

Say NO to Roberts Bank Terminal 2
Watch Video To See Why!
Latest News
1. Stop RBT2 - To Enable Success2. The War on Science – Its Not Just RBT23. RBT2 - A Wall of Silence4. The Party is Over Time to Call it a Day5. March 15 - Deadline for Final Public Oppositi...
The Issues
Issues Overview
Terminal 2
Alternatives
What About the Orcas?
Make a Donation
Take Action
Online Petition
Latest News
The Issues
Make a Donation
Take Action
Online Petition

Against Port Expansion in the Fraser Estuary BC

APE (Against Port Expansion in the Fraser Estuary BC) is a group of concerned citizens who recognize that plans for container terminal expansion on Roberts Bank (RBT2) will see the loss of globally-significant wetlands and habitat (classified as a Globally Significant Important Bird and Biodiversity Area - IBA) for migratory birds, shorebirds, waterfowl, salmon, herring, crabs and orca whales; degradation of the quality of life for thousands of Lower Mainland residents; and the industrialization of prime agricultural land. 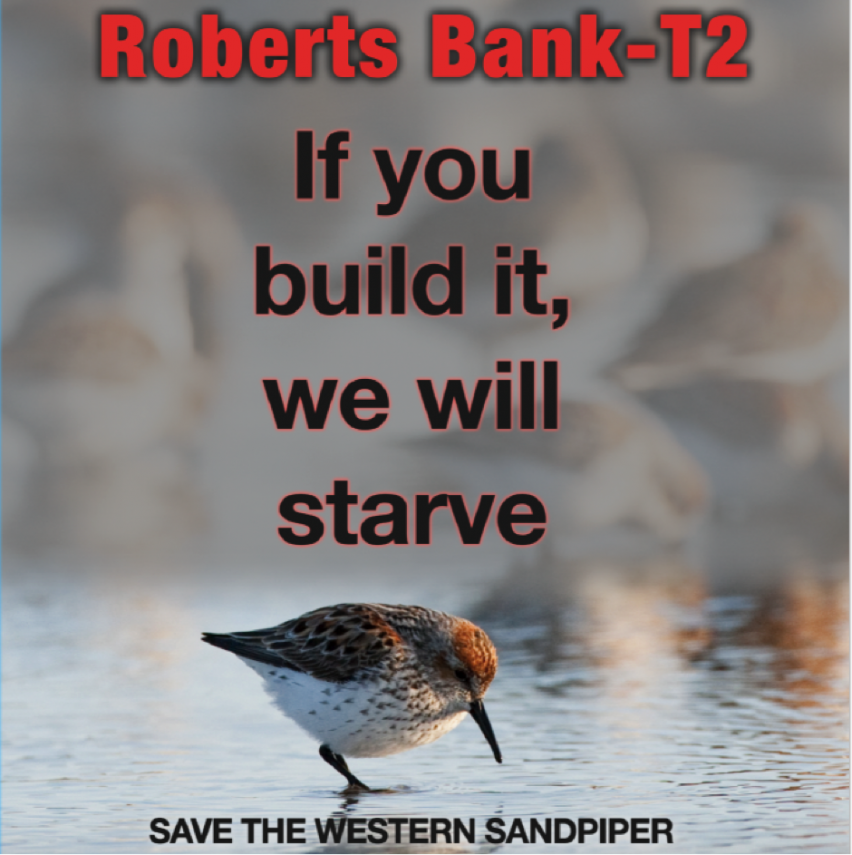 HERE IS THE CURRENT RBT2 STATUS:

SO MANY QUESTIONS, NO ANSWERS FROM THE FEDERAL GOVERNMENT.

WE NEED YOUR HELP. NOW IS THE IDEAL TIME TO URGE THE FEDERAL GOVERNMENT TO REJECT ROBERTS BANK TERMINAL 2.

E-petition 2828 sponsored by Paul Manly MP for Nanaimo-Ladysmith called on the government to reject RBT2. It closed December 2 2020 with 1861 signatures.

Those signing were all across Canada.  Eight provinces and two territories all had signatories. It was certified and presented to the House of Commons on Dec. 9 2020. The govenrment responded January 26 2021, refusing to reject RBT2 at this time, saying the decsion will be based on science facts and evidence.

The govenrment already has the science, facts and evidence. Its own scientists say RBT2 will result in significant adverse environmental effects that cannot be mitigated. How much more does the government need to reject this project?

And so the saga continues, eight years and counting, wasting more taxpayer funds.

KEEP THE PRESSURE ON THE FEDERAL GOVENRMENT

TELL THEM YOU WILL NOT ACCEPT RBT2 BEING APPROVED

IF YOU MISSED SIGNING WE HAVE PUT UP ANOTHER PETITION.

See what others are doing to stop RBT2:

1. Fraser Delta in the International spotlight. Birdlife Interantional has joined the fight to stop RBT2.
https://www.birdlife.org/worldwide/news/waterfowl-winter-refuge-fraser-river-delta-risks-being-lost-forever?utm_source=BirdLife+International+News+Notifications&utm_campaign=a1bb67f58b-Summary_news_notification&utm_medium=email&utm_term=0_4122f13b8a-a1bb67f58b-131704081&mc_cid=a1bb67f58b&mc_eid=0757e28fcf

2. In May 2022 The Garden City Conservation Society published a comprehenisive analysis of all that is wrong with the RBT2 project, under the title Stop RBT2 - To Enable Success, and sent it to the federal Environment Minister and the Cabinet

The Garden City Conservation Society has recently sent an excellent analysis of the Terminal 2 project to the federal Environment Minister and Cabinet. As a sequence of illustrated topics, it is clear and readable.

They suggest the project is “a train wreck on the verge of happening” and that it needs to be stopped to save the Roberts Bank ecosystem from further degradation.

The submission is organized into a number of topics and is the most comprehensive and fulsome analysis yet of the disastrous RBT2 project and why it must never be approved.

The War on Science – Its Not Just RBT2

Why is it that bureaucrats in Ottawa believe it is OK to hide science from the public view? Are they directed to do so by their political masters, or by the Prime Minister’s office?

In the early part of 2022 government scientists submitted two commentaries on Roberts Bank Terminal 2 to their bosses in Ottawa. But these have never appeared anywhere in the public domain.

On the draft conditions for approving RBT2 the scientists point out the many shortcomings. In particular they identified a major error, whereby the proposed conditions suggested biofilm re-creation on a major scale that the scientists have repeatedly proven couldn’t possibly work on the scale required. In addition the scientists point out that once project approval is given should mitigation measures fail there is no means to stop the project and prevent large-scale environmental degradation. The draft conditions have also attracted a lot of negative comment on the RBT2 registry from a number of well-qualified respondents.

On the biofilm guidance manual, apparently developed by port staff and/or their contractors, government scientists identified the many flaws in the Port’s understanding of biofilm. For example the manual fails to recognize it is the salinity trigger that causes the biofilm to produce large amounts of essential long-chain polyunsaturated fatty acids and only during the spring season, when large volumes of fresh water wash over the mudflats.

MP Richard Cannings raised this very issue of science muzzling on February 7 2022 in the House. Why is it still ongoing?

The MP for Delta has been asked to get copies of these two documents, but thus far her office has failed to get them from the powers that be in Ottawa.

This is not a new problem. In 2012 government scientists investigated the presence of a virus, which had been found in both farmed and wild salmon. Kristi Miller-Saunders, a federal biologist authored a study demonstrating that this virus was infecting both farmed and wild salmon. But as the UK Guardian Newspaper revealed in March 2022 successive federal governments, including the Trudeau government, kept the study hidden and ignored its recommendations. It took a ten-year battle with the federal government and a freedom of information request before the federal information commissioner ordered the study to be released.

RBT2 - A Wall of Silence

Wondering when to expect a decision on Roberts Bank Terminal 2?

By now a decision on the RBT2 project should have been made. After eight years of studies, assessments, public hearings and comment periods a decision is overdue. The science, facts and evidence are compelling, RBT2 will result in significant adverse environmental effects that cannot be mitigated. There is no economic justification – RBT2 is not needed now and never will be.

The federal government’s decision pause has been lifted. The final round of public commentary – with thousands of opposing submissions – closed March 15.

But where is the decision? You may well ask.  A wall of silence has descended on this project. The federal government appears to be in no hurry to make a decision.

However the Vancouver Fraser Port Authority (VFPA) has not given up. Despite the absence of a project approval they are working to identity a contractor to build a new landmass and marine structures, and a terminal operator to build, equip, and operate the terminal.

In Mid May VFPA is playing host to the World Ports Conference to be held in Vancouver, where they will again be promoting RBT2.

The VFPA lobby in Ottawa is also hard at work. There are numerous ads promoting RBT2 in the media - print, radio, television, electronic, webcasts, billboards. Several of these are aimed directly at the politicians with ads in two journals as well as a billboard near parliament hill – see the attached recent examples.

The Vancouver Fraser Port Authority is now adopting a new strategy and gearing up for a fight. It maintains many of the adverse environmental effects that will result from RBT2 are beyond its care and control (marine shipping, up stream Fraser River, road and rail traffic through the lower mainland and into the interior). They make that very clear in their recent submission to the Impact Assessment Agency Canada, by pinning the responsibility on governments.

If the decision does not go their way VFPA may be gearing up for court action – one federal government agency suing another?!!!

Equally concerning is that Transport Canada has come out in favour of RBT2, with the Department of Fisheries and Oceans also being somewhat supportive.

In brief this is the project status as of mid May:

We need constant and ongoing pressure on the ECCC minister and on cabinet.

The Party is Over Time to Call it a Day

The party is over. After 13 years of submissions, reviews and public hearings It is time now for the federal government – Cabinet (Governor in Council) - to make a decision under the governing legislation CEAA 2012 Section 52. To paraphrase the legislation:

RBT2 cannot be justified in the circumstances. There are already announced alternatives that can deliver additional container terminal capacity when the market warrants it sufficient to meet Canada’s trading needs for decades to come. These alternatives will do less environmental damage, will be much cheaper and provide more effective, sustainable terminal capacity.

The responsible ministry (ECCC) has stated many times over the decision will be made based on the science, evidence and the facts. All three of those already determine that RBT2 must be denied approval.

The science, facts and evidence are overwhelming:

There is more than enough science, evidence and facts to deny RBT2 approval.

But despite all that the VFPA is refusing to give up. On March 15, the day the final public comment period closed VFPA wrote to the Minister ECCC stating they will be responding to all the opposing submissions and providing further clarification in the weeks to come.

When is this going to end? When will VFPA finally accept the party is over and it is decision time?

Let’s hope the Minister does the right thing and says no more submissions. But if he does accept further submissions then government agencies, scientists, environmental groups, indigenous groups, the public must all have opportunity to review and respond.

Which part of NO does the Port of Vancouver not understand?